011. What Are The Core DOCTRINES Of Christianity? Part 3

012. What Are The Core Doctrines Of Christianity? Part 4 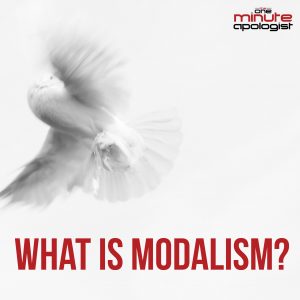 “During the third century, a heresy arose which is called Modalism or Sabellianism or Monarchianism. According to this heresy, the Father, the Son, and the Holy Spirit are all divine, but they are not distinct persons.” William Lane Craig

Modalism is a heresy that denies the doctrine of the Trinity. Often surprising to some Christians, United Pentecostals ascribe to this ancient heresy. Modalism teaches that God is a single person who has eternally existed and yet He has revealed himself in three modes or forms. Modalism rejects the Trinitarian belief that God exists at all times as three distinct persons—Father, Son, and Holy Spirit. Rather, the modalist believes that God is one person made known in three modes. In the Old Testament, God manifested Himself in the mode of the Father. With the incarnation, God manifested Himself in the mode of the Son. And following Jesus’s ascension, God made Himself known through the mode of the Holy Spirit. Problematically, modalism rejects that the Father, Son, and Holy Spirit exist simultaneously, which means that modalists deny the distinctiveness of the three persons in the Trinity.

This problem is compounded when you consider the baptism of Jesus. At His baptism, we see all three persons of the Trinity present. The Father speaks from heaven, the Son is baptized, and the Spirit descends upon Jesus like a dove (See Matthew 3:16-17). Furthermore, after His resurrection, Jesus told His disciples to baptize people in the name of the Father, Son, and Holy Spirit (Matthew 28:19). New converts were to be baptized in the One Name (God) who exists in three persons (Father, Son, and Holy Spirit).

“And when Jesus was baptized, immediately he went up from the water, and behold, the heavens were opened to him, and he saw the Spirit of God descending like a dove and coming to rest on him; and behold, a voice from heaven said, ‘This is my beloved Son, with whom I am well pleased’” (Matthew 3:16-17).

What difference does it make if all three persons of the Trinity don’t simultaneously exist?

Bobby Conway, “What Is Modalism?” www.youtube.com/watch?v=KMPIxCDDxTs.