Is It Okay to Smoke Marijuana for Fun?

Is Drinking Alcohol a Sin?

006. What Do Christians Do When Jehovah Witnesses Come Knocking? 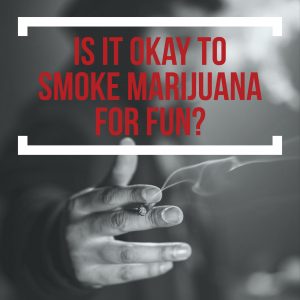 “Drugs will not make one’s problems disappear; they will only delay the onset of having to deal with problems and will often create more problems.”

In my past, I smoked plenty of marijuana, so I get the attraction. Being high feels good, and when life stinks, who doesn’t long for a good escape? But as Christians, our escape route must look different from that of the nonbelieving world. We are to turn toward God, not drugs. He is our pathway to freedom, unlike drugs, which often entangle us.

While the Bible speaks directly about alcohol, it doesn’t address the use of marijuana. Yes, I’ve heard the desperate attempts to justify weed usage on the basis of Genesis 1:29 where God says, “Behold, I have given you every plant yielding seed that is on the face of the earth.” But do we really think God had getting high in mind? Talk about a poor use of Scripture. And would we use the same logic for the coca leaf—the raw material for producing cocaine? Of course not! We are to steward God’s creation wisely. But, you might be asking, “What’s wrong with smoking a little pot, especially since it’s legal in certain states now?”

Second, while alcohol can be enjoyed in moderation, that’s not true with marijuana, especially today. Back when I smoked weed, all it took was one good bong hit of some green bud and one could have a pretty good high. With today’s increased levels of THC (the chief intoxicant in marijuana), the marijuana is far more potent. Besides, I’ve met countless people who can enjoy a glass of wine and be seemingly unaffected, but I’ve never met anyone who smokes weed other than for the purpose of getting high.

Third, marijuana has been medically proven to have harmful side effects. Amongst those side effects are laziness and the destruction of brain cells—two things the Bible directly or implicitly forbids (see Proverbs 6:9-11 and 1 Corinthians 6:19-20).

Fourth, marijuana often serves as a gateway drug. It spikes a person’s curiosity for other drugs, leaving many asking themselves, I wonder what taking _______ would feel like? It has a way of capturing many who partake and turning them into full-blown drug addicts.

With the insights provided by medical research and biblical principles, it’s amazing that the question of marijuana usage is even up for debate amongst Christians. Avoid it, friend.

“For the grace of God has appeared, bringing salvation for all people, training us to renounce ungodliness and worldly passions, and to live self-controlled, upright, and godly lives in the present age” (Titus 2:11-12).

Why do some people think that legal equals moral?

Bobby Conway, “Is It Okay to Smoke Marijuana?” www.youtube.com/watch?v=cvOoTbmXfVM.